At Bay Prime Seafood Company, you get ready-to-cook seafood, trimmed and packed with care. We provide you with unique recipes and cooking advice to prepare a delicious meal.

Tuna is a popular seafood product with interesting facts mentioned by legendary philosophers like Aristotle and Pliny. Aristotle recorded tuna’s age and growth patterns in “History on Animals,” and Pliny, the Elder, prescribed different tuna parts to cure illness. The ancients even valued the tail and nailed it at the doorways to ward off evil spirits. Before 1970, this fish was in high demand in Japan and throughout the Mediterranean region. Later fresh tuna was popular among foodies worldwide and became a great alternative to red meat due to the meaty texture.

The literature has mentioned such bizarre life forms in epic poems that have fired our imaginations for centuries. Similar to squid, there is Scylla in the Odyssey, the Kraken in Tennyson’s poetry, and “The Great Live Squid” in Moby Dick. However, the modern impression of squid began to form with Jules Verne’s “20,000 Leagues Under the Sea,” published in Paris in 1871.

After the real-time encounter, Verne accurately depicted a giant squid with primate-like stereoscopic eyes, a large head, and writhing tentacles. Although unattractive, squid or Calamari (as it’s known in Italy) tastes delicious and has found its way to mainstream America, from fish-n-chip stands to white-tablecloth restaurants. 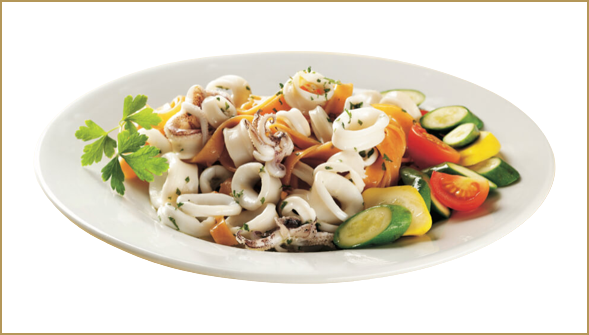 There are more than 2,000 catfish species worldwide. Catfish have poor eyesight; they use their sense of smell and taste buds to find food. Unlike other fishes, scaleless Catfishes are tiresome to catch due to their tough and slick skin. Some species of “cats” can grow to more than 100 pounds, making them an avidly sought-after sport fish.

Codfish is a species over which wars have been fought and trading fortunes made for hundreds of years. In the 500s and 600s, the Basque and Nordic colonies introduced the method of preserving cod through drying and salting. This practice made it possible to travel longer and farther distances with cod without the risk of food spoilage.

In recent times, salt cod has been highly popular as a staple food in Portugal, Spain, Italy, and Brazil. On the other hand, fresh and frozen cod is widely consumed throughout North America, Europe, and Japan. It is the world’s second-largest whitefish resource, after Alaska Pollock.

Salmon have a streamlined fusiform body and a large, powerful forked tail. In the Eastern Australian Salmon, the upper lobe is equal to or less than the length of the head. The dense gills and large proportion of red aerobic muscle in the ‘fillets’ speak of a fast-paced pelagic life.

Sole is a group of flatfish belonging to several families. Generally speaking, they are members of the family Soleidae, but, outside Europe, the name sole is also applied to various other similar flatfish, especially other members of the sole suborder Soleoidei as well as members of the flounder family. In European cookery, there are several species that may be considered true soles, but the common or Dover sole, often simply called the sole, is the most esteemed and widely available.

Originated in Africa and the Mediterranean (back in the time of pharaohs), Tilapia is a hardy, warm-water fish. It has been called “St. Peter’s Fish” because some Biblical scholars believe that it is the fish Peter caught in his nets in the Sea of Galilee and that Jesus multiplied a thousand-fold to feed the masses. Read our Recipes